New Zealand offers everything travelers dream of: rich culture, outdoor adventure and untamed nature. Discover what makes this island so special by reading about its blue wonders and sandy beaches.

New Zealand boasts a richness in land, food and culture like few others do. It is a land of great diversity, from its rocky formations to its pristine bays to its active volcanoes, this land is a travelers paradise. Nature is not all this country has to offer, the Kiwis have also mastered the art of food and wine.

New Zealand is located in the south-west Pacific, and consists of two main islands - the North Island and the South Island, seperated by the Cook Straight. Many smaller islands lie offshore. 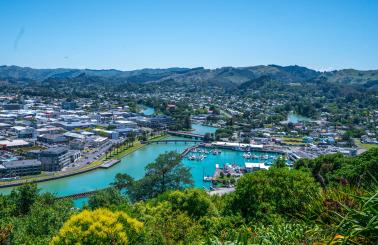 Tairāwhiti Gisborne is best known for being the first city in the world to see the sun rise each day. Located on the East Coast of New Zealand's North Island, it is the largest settlement in the Tairāwhiti region. More importantly, this will be the location of our marathon. Gisborne is home to a large Māori population, with 48.9% of the population identifying themsleves as Māori and the region holds a huge amount of Māori culture and historic significance. It also has a great reputation for surf beaches, wine and food. In fact, Gisborne is sometimes called the unofficial 'Chardonnay Capital of New Zealand'. 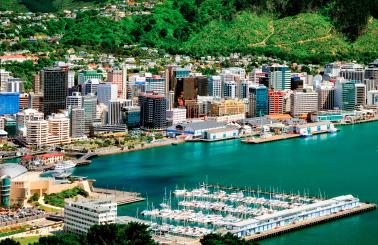 Wellington became the capital of New Zealand in 1865, it lies on the Southern tip of the North Island, on the shores and hills surrounding Wellington Harbour. The city is great mix of beautiful nature and creative minds. In fact, it was recently named the "coolest little capital in the world" by Lonely Planet. Mount Victoria, near the city center, stands 196 meters tall (643 feet) - it offers a breathtaking view of the city and excellent walking tracks. Wellington is home to many prominent institutions such as the Beehive and the Old Government Building, one of the world's largest wooden structures. Due to its location on a fault zone, the city has survived many earthquakes. Wellingtonians are known for their love of casual dining which means you can find plenty of great food trucks and night markets. 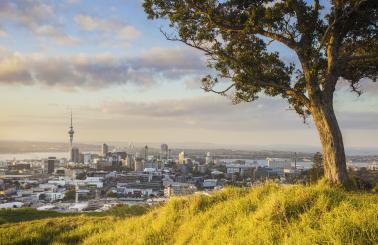 Auckland, also known as the "City of Sails" is New Zealand's most populous and diverse city. It lies on the north end of the North Island. The city conveniently occupies a narrow isthmus between the Manukau Harbour and the Waitemata Harbour and spreads out over volcanic hills. It offers a perfect combination of urban lifestyle and natural wonders. Auckland also has country's largest concentration of indigineous Maori, which means there is a vibrant cultural scene. The city's diverse landscapes provide endless opportunities for adventure, this includes lush rainforests, black and golden sandy beaches and 48 volcanic cones, among others. Auckland is also home to world-class chefs and wineries, making it a foodie's paradise. Two of Auckland's most notable features are Waitemata Harbour and the Auckland Harbour Bridge.